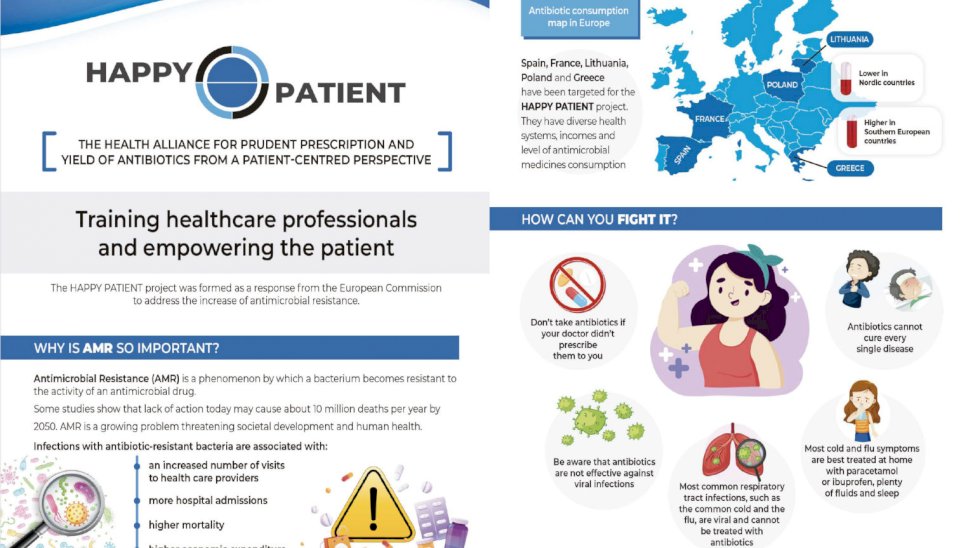 Up to 16 scientific, university, and clinical organizations from 8 European countries (Spain, France, Germany, Poland, Lithuania, Netherlands, Greece, Denmark, and Norway), are participating in a European project over the next 3 years to generate studies, research, and training materials in the following target-countries: Spain, France, Greece, Poland, and Lithuania to prevent the incorrect and massive prescription of antibiotics at various levels of care. The start of activities was on the 1st of January 2021.  HAPPY PATIENT aims to set an end to the arbitrary prescription of antibiotics. The WONCA Europe member organization, the Spanish Society of Family and Community Medicine (semFYC) is responsible for the communication and dissemination of the project, as well as for delivering and conducting a training program among the countries involved in the project. This is the first time that a European project targets AMR in all the levels of care, and it is also the first time that Family Doctors are leading this European research.

The current misleading antibiotics prescription in many European countries is one of the biggest threats to western societies. The WHO Europe Region has been warning in this regard for years, and the SARS-CoV-2 pandemic has not changed its position.

The increase in mortality derived from the resistance of microorganisms is reaching alarming levels in many other parts of the world, fueled, among other circumstances, by its massive use in animals and by the industrialization of meat production processes.

The first Survey of HCW’s knowledge, attitudes, and behaviours on antibiotics, antibiotic use, and antibiotic resistance, published in 2019, collected data from 18,000 professionals in 24 EU countries, 75% of whom stated that they did not know in depth the consequences of resistance to antibiotics.

One of the most important tasks in combating antibiotic resistance is to classify AMR one by one and on a case-by-case basis. For example, common bacterial infections, including urinary tract infections, sepsis, sexually transmitted infections, and some forms of diarrhea, are known to have high rates of resistance to antibiotics frequently used to treat them around the world. The rate of resistance to ciprofloxacin, an antibiotic commonly used to treat urinary tract infections, was found to be between 8.4% and 92.9% in Escherichia Coli and and between 4.1% and 79.4% in Klebsiella pneumoniae, as recently reported by the Global Antimicrobial Resistance and Use Surveillance System (GLASS).

In another order of diseases, antibiotic-resistant Mycobacterium tuberculosis strains are already a very real threat in the progress of containing the global tuberculosis epidemic.

The WHO estimates that, in 2018, there were around half a million new cases of rifampicin-resistant TB (RR-TB) identified globally, of which the vast majority with multi-drug-resistant TB (multi-drug resistant tuberculosis MDR-TB), a form of tuberculosis that has been found to be also resistant to the two most powerful anti-tuberculosis drugs ever created.

Less than 60% of those treated for MDR/RR-TB were successfully cured.

The health care professionals to be involved in the HAPPY PATIENT project are:

HAPPY PATIENT will implement a multifaceted intervention based on state-of the-art procedures and information to change practice behaviour and patients’ perceptions about antibiotic use and AMR.

Based on the Audit Project Odense (APO) methodology a context analysis will be performed, enabling the identification of quality problems, which will be addressed in the different components of the multifaceted intervention.

The project’s work will make available practices and materials focused on the most important interaction in terms of understanding and implementing more responsible antimicrobial prescription and usage for human consumption: the interaction between health care professionals and patients. As a result, an ongoing impact will be delivered through the immediate ability to localise and up-scale outputs to national, regional, and local levels.